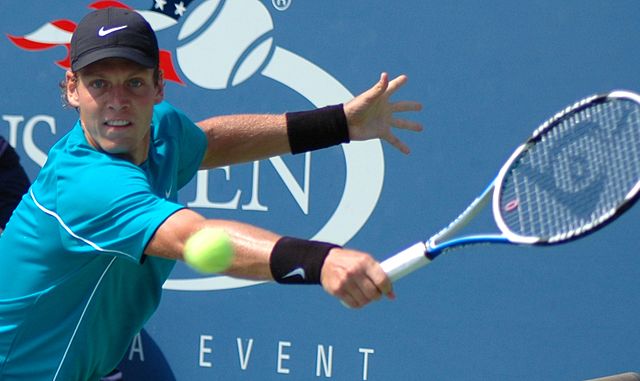 I know my submissions are not as often as they should be, and that I skip three quarters of a sporting event before I post about it. However, who would be interested to read about the boring sweeps that occurred at the beginning of this year’s edition of the Wimbledon Championship? Me neither, so let’s jump to the exciting part.

To summarise the tournament so far: during the first week no surprising exits occurred that would leave us at a mouth open. Federer, Djokovic, Murray and Nadal all made it safely to the second week, the Zverev brothers made history by becoming the only brothers both reaching the second week of a Grand Slam. Odd names that do not pop up that often in the late stages of Grand Slams came about; Gilles Muller, who overcame Rafa Nadal in the 1/8-finals with a five-set drama, finishing 15-13 after 2 hours and 15 minutes of play in the fifth, lost to Marin Cilic with the same 3-2 result. Milos Raonic, last year’s finalist at the Championship, defeated young star Alexander Zverev 3-2 as well, yet fell to King Roger with a 3-0 sweep.

Most surprisingly, however, are Andy Murray and Novak Djokovic’s exits at the quarter-finals. The former endured a five-set battle against the American Sam Querrey, who becomes the first male US player to reach the semis of Wimbledon since 2009 ( the last one was Andy Roddick). At the same stage of the tournament Novak Djokovic, after being down a set and a break against Tomas Berdych, retired with the excuse of having a long-term elbow injury. Something fishy? Maybe, but I will let that for you to decide.

What is more exciting now is…wait, noo there isn’t anything exciting. Roger Federer will win his eighth Wimbledon title, continuing his amazing run which started earlier this January when he captured the Australian Open trophy. No one stands in his way. He is too majestic, too skilful for the remaining players to beat him. For anyone to beat him. Ask Milos Raonic. Ask Rafael Nadal. Ask Grigor Dimitrov. No one can beat him.

I have always been amazed at the Czech player for his consistency in tennis. Ever since he broke the top 20 in May 2006 Berdych has never gotten below that mark in the ATP Raking. He has reached a Grand Slam final only once, here at the Championship in 2010. Berdych has 13 career titles, 0 Grand Slam trophies. He has managed to reach the quarter-finals of at least one Grand Slam tournament each year, yet he has always failed to get his hands on the gold or silver. Berdych looks like that guy that is always in the back of your head throughout the tournament; you are not surprised while he is still in the draw, yet after a certain point you see he is not there anymore, and you are not surprised again.

This year seemed to be his typical Grand Slam quarter-final exit: if only Djokovic had played his best tennis, Berdych would once again exit at the same spot he usually leaves. Some would say him reaching the semis is all thanks to Novak retiring. And that his fate against Federer is doomed, that he will never reach a Grand Slam final again.

Here is where some people are mistaken. Tomas Berdych will win the 2017 Wimbledon title. His recent performances suggest so. His win against German phenomenon Alexander Zverev earlier this week is just a part of that. He reached the finals in Lyon, where he lost to Jo-Wilfried Tsonga, but not before going up against Milos Raonic and Gilles Simon. Earlier again, he beat Tsonga in this year’s Doha tournament, and multiple times he downed Misha Zverev’s and Denis Istomin’s powerful shots and serves. He has a 26-13 record this season, which is his best since the 2015 season.

Tomas Berdych is 31-years-old. He is not Roger Federer, or Andre Agassi to play his prime until the end of his career. In fact, he has dropped to number 14 on the ATP Ranking this season, his lowest since 2010. Time is taking its toll on him, yet the Czech is a smart player. He realises he wouldn’t get a chance like this to compete for a Grand Slam. “I just need to go out there and play my best. I think he [Federer] is the greatest of them all” is what the Czech said in front of an interview about his match-up with the Swiss. This is his opportunity to seize the glory he’s been longing for the last 16 years of his career. The redemption he has been looking for since 2010.

In fact, the last time Berdych beat Federer was indeed at the 2010 edition of the Championship. It was that year that he beat Djokovic as well before losing the final to Nadal. The Czech has already taken down Nole, can history repeat itself with a different ending?

The Wimbledon semifinals will start on the 14th July 2017 at 1 pm GMT.